The dangers of desperately seeking out sex straight after a break-up. 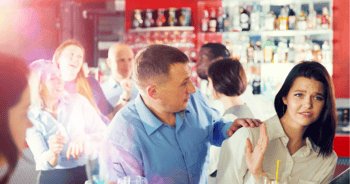 When you first break-up with a woman, it's typical to want to find a one-night-stand to fill the void.

While it can sometimes help you feel better (ableit briefly), it can also be extremely detrimental to your healing process.

You reek of recent break-up

Women can sense it when you are desperate to fill the void of an ex.

They know you're trying to use them to heal your bruised ego.

You're off your game, your confidence is low and you're likely being overwhelming in your approach.

None of these ways of being are helpful in the pursuit of a one-night-stand.

You're in for a bunch of rejections.

After you've attempted to seduce a few women and they've inevitably knocked you back, you're feeling terrible about yourself.

Sure, the break-up was horrible, but this is a new low.

You're starting to think 'maybe I'll be alone forever' or 'I guess nobody loves me'.

From here you're left with two choices:

1. You drop your standards and sleep with any woman who will have you

This may seem a good idea at the time, but wait for that post-sex come-down to kick in.

You're sat there, naked and disheveled thinking to yourself: 'that was nowhere near as good as sex with my ex' or 'I wish we never broke up'.

Of course you feel this way, no woman out there was going to offer you the same level of intimacy or familiarity as the one you were in a serious relationship with, let alone the first woman to say yes to your desperate attempt at sexual redemption.

2. You seek affection in the arms of familiarity

While you're feeling low and hurt, it's typical to want to seek out support.

And who is the first person that comes to mind when you think of support?

So you send her a message.

That's where any of the following scenarios can play out:

- She ignores you, so you think to yourself: 'Ouch, guess she's handling this better than me. I'm a loser'

- She texts you back, you meet up and you have sex. You just undid any progress you'd made in getting over her up until to this point

- She texts you back, shows you some pity and you feel like a loser.

- She texts you back and you and her end up in a text / phone-based argument. You both say things you regret and now the break-up becomes even more bitter

I'm not saying one-night-stands have no place as part of the break-up healing process.

I'm just saying, you have to beware of the potential consequences of your attempt to initiate one.

Struggling with women? Beware of advice from a ladies man

Why ladies men aren't always the best people to ask for advice on women (if you are a man who...

The pros and cons of upward social comparison

Social comparison is essential as it provides us with a benchmark for our skills and abilities,...