How to move on after she ghosts you

Online dating and getting ghosted go hand in hand. While you can't avoid it, you can find better ways to deal with it. Here's how. 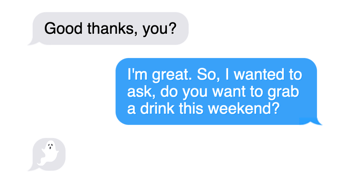 There are few things more frustrating than being ghosted by a woman you're chatting with online.

Whether it's been two minutes or two months of back and forth dialogue - being ghosted is never a pleasant experience.

Here are some of the common emotional reactions to being ghosted:

'She clearly isn't attracted to me.'

'I'm obviously not good enough for her.'

'I shouldn't have told her that lame joke.'

'I've already told my friends about this girl, now, what am I going to say when they ask me about her?'

'She told me she was keen to catch up. Was she leading me on?'

'Maybe she lost her phone?'

'What a waste of time women on this app are. They hold way too much power.'

'All they do is lead you on. What's the fucking point?'

'I'm never going to find anyone.'

Any of these sentiments sound familiar?

Well, I have some bad news.

As long as online dating exists, so too will ghosting.

So, what's the solution?

Do you swear off online dating altogether, just like you've been promised yourself you would for the past nine months?

Or, do you change your attitude, so it no longer fazes you?

If you're not ready to clear the apps from your phone just yet, here's a guide on how to better manage the pain of a ghosting:

How you should deal with yourself

This may sound a little counter-productive, but it's actually a good thing.

Being ghosted can leave you feeling alone and unwanted.

In fact, there's not a man on this earth who is immune to getting ghosted on dating apps.

Many of you may be thinking: 'but I've got this mate who's a real ladies man, he gets laid all the time using dating apps. No girls seem to ghost him.'

I can guarantee you he's been ghosted by women online many times.

You know why you don't hear him whine about it though?

Because it doesn't faze him enough to mention it to you.

Disclaimer: I'm aware that some men get ghosted more than others, but the underlying lesson here is that it happens to absolutely everybody. Stop thinking you're the biggest loser in the world.

2. Stop talking about her so much

One of the reasons men start to develop intense feelings for a woman they meet online, is that they talk about her non-stop to their family and friends.

I get it, you're excited, you and she have a lot of the same interests, and you're almost convinced she's the one.

The problem with proclaiming these things to anyone who will listen is that it further reinforces your desire for her internally. You start to make yourself emotionally dependent on her.

The more you talk about her, the more it will hurt when she proves herself to be a ghost.

If you have a tendency for falling too fast, too soon, set yourself a goal for the next woman you fall for.

See if you can keep quiet about her to your friends and family until you've  at least... 'been on a date'/'kissed for the first time' (choose a milestone based on your own personal preference.)

3. Think about opportunities for self-improvement

This can be difficult to do at the time, but if you can extract any constructive criticism from a ghosting, it will serve you well for future interactions with other women.

Were you coming on too strong?

Was your approach tired and boring?

Are there any patterns around how far into the conversation women normally ghost you?

If you notice commonalities across the ghostings, it's likely time to reconsider your approach.

Disclaimer: Plenty of men get ghosted by women for no good reason. Don't beat yourself up trying to come up with self-improvement opportunities if the reason she ghosts you is a complete unknown.

It's easy for a man to take being ghosted personally.

Well, for any men feeling this way, consider this:

You are worth more than the sum of the vague thirty-word bio and four posed photos on your Tinder profile.

She ghosted you before she got to know you properly, often, before she even met you in person.

She doesn't even know if the two of you have chemistry.

She doesn't even know how fun you are on a date.

Disclaimer: I know plenty of men who get ghosted after they've met a woman in person. This can be a little more difficult to come to grips with when she ghosts you. Still, you need to realise that her abrupt disappearance isn't something you should take personally. It's often a reflection on her.

5. Count yourself lucky for dodging a bullet

You had three straight weeks of daily, flirty messaging with a girl online.

Then one morning you said 'hi', and never heard back from her again.

As you're left wondering what went wrong, you mistake the pain of rejection for feelings of true love for her.

Before you send her a 500-word proclamation of love as a last-ditch effort to regain her affection, ask yourself:

Do you really want to be with someone who can so flippantly, without reason, change their behaviour and abandon you?

Sometimes you need to shake it off and count yourself lucky for dodging a bullet.

How you should deal with her

1. Know that there are any number of reasons why she ghosted you

You need to consider that there may have been a valid reason why she ghosted you.

A reason that had precious little to do with you said or anything you did.

I don't mean highly improbable reasons, like 'maybe she's in the hospital' or 'maybe she had her phone stolen'.

Let's get realistic. Consider some of these reasons instead:

- Maybe she's only on this app for a bit of attention, never intending to genuinely pursue a man in the first place.

- Maybe she recently got her heart broken, and her emotions are a bit fucked up.

- Maybe she was already teetering on becoming exclusive with a guy before she even started speaking to you.

Though it may just be a case she isn't interested in you, it's naive and harmful to blame yourself every time.

Disclaimer: While these thoughts are healthy to consider, keep them to yourselves. Accusing her of them, as a reaction to being ghosted just comes across as petty.

2. Realise how silly your intense feelings for her are

If you've been consistently speaking to a girl online for two weeks, and she eventually ghosts you, it can be excruciatingly painful.

You can feel heartbroken about it.

But you shouldn't, for three reasons:

Firstly, two weeks prior to the ghosting, this woman was a perfect stranger. No matter how comprehensive or intense your conversations with her became, you need to remember, it was for two weeks of your life. Summer flings last longer than two weeks. Get some perspective.

Secondly, if you can feel so strongly about this woman, you're certainly capable of feeling this strongly for another woman (no matter how much you tell yourself 'honestly, no-one has made me feel like this before, I'll never find another like her')

Thirdly, you're likely mistaking rejection for heartbreak. Rejection has a funny way of tricking us into believing we are lost without the person who rejected us. An old saying comes to mind here: 'you always want what you can't have'. Stop confusing the pain of rejection with the feeling of true love. Besides, for every classic saying, there's a classic counter saying: 'the chase is often better than the catch.' Consider this one next time you're ghosted.

3. Perhaps the two of you were unsuitable for each other

Too many men tend to take rejection as a reflection of their inferiority, rather than a sign that he and she just aren't suitable for each other.

Rejection has a funny way of making us immediately start blaming ourselves and associate the reasons for the rejection with our insecurities: 'I bet it's cos I'm short', 'I bet it's because of my big nose,' 'Oh God, she probably thinks I'm boring,'

Did you consider for a second that maybe she's only into skinny punk rockers?

Did you consider that maybe four other guys sent her a message on Tinder within ten minutes of you sending yours?

Did you consider that maybe she doesn't get your sense of humour?

Did you consider that maybe she's still in love with her ex-boyfriend?

Instead of blaming yourself every time a girl ghosts you, or even blaming her, blame the gods of romance for briefly pairing two unsuitable people together.

Realise the ghosting was a sign of unsuitability, pull yourself together and just know that sometimes you need to slay a few dragons before you get the Princess.

There's always going to be another chance to find someone more suitable, but only if you don't get lost in your own insecurities and continue your search, without being hampered by the baggage of a few silly ghosts.

Name-calling and hurtful insults towards a woman as a  response to being rejected only make things worse.

Besides sealing your fate and ensuring she will never sleep with you, it also encourages her to think: 'I'm glad I ignored this guy, he's a psychopath.'

It may sound petty, but do you really want to give her the moral high-ground after she blatantly ghosted you?

Be the bigger person here, gentlemen. Channel that passion and energy into finding someone new.

5. Don't continue to chase her

Do not fall into the trap of believing a woman's indifference towards you means she's playing hard to get.

If you find that you are always the one to instigate conversations with her, and even then it takes her more than a few hours to respond, you need to back away.

It will do you no good for your mental state, or your chances with her in future.

If you sense she's backing away, resist the urge to begin chasing her.

Lest you will soon spot a ghost.

Being ghosted is an inevitable part of online dating.

If you can alleviate the frustrations around it by shifting your mindset, you'll be all the better for it.

Advice to stand out from the crowd and attract her attention on a first date.